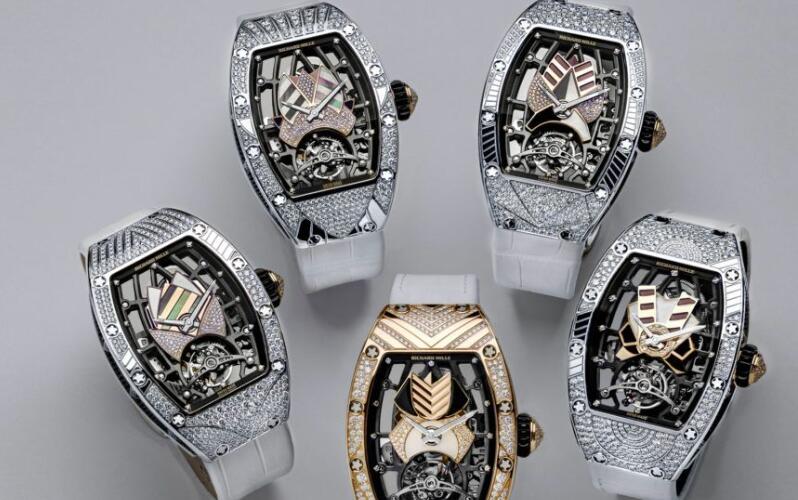 The new RM 71-02 Automatic Tourbillon Talisman replica erupts in coloured stones, drawing on the untamed energy and raw glamour of the 1970s, and the timeless and indomitable freedom this decade represents. These are the years most closely identified with the rise of club culture, the roots of electronic and disco music, and an urban tribe that showed its most brilliant plumage only after sunset. Richard Mille’s Director of Creation and Development Cécile Guenat was inspired by the heightened expression of disco-era individualism, a hyper-realistic synthesis of light, sound and colour that defined slices of 1970s culture such as the throbbing beat of a hit single, the theatrical interiors of Studio 54, glittering lamé and sequin-strewn fashions.
RM 71-02 AUTOMATIC TOURBILLON TALISMAN

Limited suite of 10 variations, each produced in an edition of just 7 pieces
Microblasted grade 5 titanium with PVD treatment lends great rigidity to the baseplate and the bridges, as well as the precise surface flatness essential for perfect functioning of the gear train.

The skeletonised baseplate and bridges were subjected to intensive and complete validation tests to optimise their resistance capacities.
This variable-geometry rotor has been incorporated within the in-house CRMT1 calibre, making it possible to set the rotor according to the owner’s activity level.

The setting is modified by adjusting the two moveable weights into the correct position and fixing them in place with spline screws. The inertia of the movement is increased when the two weights are closer together; the barrel then rewinds more quickly. If the weights are positioned at the extremities of the rotor, the inertia is decreased and the barrel winds more slowly.
This type of balance wheel represents the ultimate in innovation. It guarantees greater reliability when subjected to shocks and during movement assembly or disassembly, hence better chronometric results over time.

The regulator index is eliminated, and a more accurate and repeatable calibration is possible thanks to 4 small, adjustable weights located directly on the balance.
MOVEMENT CHARACTERISTICS

The 10 variations on the snow and grain settings bring together different textures, diameters and faceting, achieving freedom of expression all over the front bezel and caseband, whereas the caseback is engraved with matt bands.
The case, crafted in white gold, is composed of 75% gold, 4% silver and a high palladium content of 17% to provide white brilliance.
No less than 44 different stamping operations are required for the three main components of the case (bezel, caseband and caseback). The machine tooling process requires 2 days of adjustment for each component (bezel, caseband and caseback). The empty case involves over 255 tooling operations and more than 5 hours of glazing and polishing for the final phase. The complex shape of the case is obtained thanks to a 5-axis machine.
Each dial, a mere 0.9 mm in thickness, is handset with ornamentals and coloured stones. This component is an immense technical challenge because of the many different finishing operations required: sandblasting, polishing, setting… and all this in a very small area arranged on several levels. The dials draw on two distinct universes: one more plant-based and the other more urban.
Complementing the RM 71-02 Automatic Tourbillon Talisman collection is a full series of coloured metallic patent leather, embossed with understated botanical motifs at 12 o’clock and geometric motifs at 6 o’clock to set off their jewelled cases.

The design anticipates straps that exhibit two different tonal each, starting with one colour above the case and ending with a contrasting shade. In keeping with the underlying inspiration, the colour contrasts are paired with materials that play on light and texture. In another first in a Richard Mille collection, metallic leather treatment reinforce the impact of the coloured stones, channelling the glamour of 1970s fashion.